This is the initial skeleton of this, my 3rd installment of my ongoing saga amateur radio.

This is the unfinished 3rd installment of my AR saga which covers the erection of one or more aerials to get on the air without being totally dependent on rogue winds of good propagation blowing a signal at me sent at 1.5 KW from a quad array of 4 element Yagi-Uda beams on a 150' tower on top of a hill or mountain.  I always wonder if those guys or gals feel unsatisfied after such massive and expensive erections of wire menagerie.  It's like spending $300k on a car that does 0-60 in 3 seconds.  You have nothing to be surprised or appreciative about.  It better well perform!  Of course, my outlook on all this would undoubtedly change if I had $100+k to blow on a shack and wire farm without a 2nd thought.

Back to reality!  Here's my current "wire" (slightly improved but still good for a chuckle)! 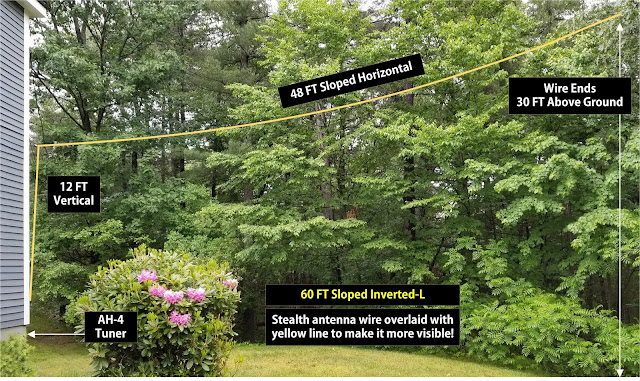 As of this post's update, I've updated my antenna from the lowest level of the antenna hierarchy to a barely decent minimum. I call it antenna version 02a, an Inverted L Sloper of sorts. I increased the vertical and horizontal legs to 12'V and 48'H, rising to about 30-35' into a tree for a roughly 60' total length.  I used standard hardware store #14 AWG stranded and coated copper wire.  It still runs from an AH-4 antenna tuner on the ground just behind the corner of the house to a nearby tree.

The next (and maybe final improvement) might be to extend it to 95' rising up to a tree further away with an end point about 40-50' above ground.

The current design shown has been up for about 3 weeks and has allowed me to work all 6 continents (earning a 6 Continents Award from QRZ), about 35 of the 50 states, and 55 countries.  I just added Kuwait, Turkey, and New Zealand. Despite that progress, I'm still trying to log Vermont and Rhode Island, both of which are only 30 miles away. Very strange.


I've heard from several helpful AROs who often respond with, "Hey, just get a dipole way up 50' or higher or get a proper beam".  Right!  All properties, budgets, and partner arrangements are not equal.  Despite being on a 1 acre ex-urban lot, the house, driveway, the property's meandering dog leg lot lines, a myriad of closely overlapping and intertwined trees, and our power lines consume almost all of it save for an apron of only 20-30' on 3 sides with a few odd gaps here and there.

About the trees: I am surrounding by large stands of new, old, dead, and/or decaying conifers and deciduous trees which, together, create a complex array of overlapping branches that are either obstructions to wires or are easily broken off eliminating their use as supports.  I do have several large 100+' trees with nice limb yokes 40-70' high to sling wires over but they also have as many other branches sprouting out in all directions.

Even if I manage to sling a rope and pull up the apex of a dipole, G5RV or Double Bazooka some 35-60 feet up, pulling out the elements is near impossible because all lateral element lifting paths are obstructed by branches at opposing angles on the same or adjacent trees - preventing them from being pulled straight.  My limited experience and research says it would be pretty bad to have elements bent and snagged across many branches with severe impact to VSWR, radiation, and fire risk!

My most immediately implementable options seem to be, in order of difficulty and cost:

In an escapist effort to avoid thinking of my antenna dilemmas, my mind wanders to the less feasible hex and CobWebbs which are very large for 20m and immense for 40m (that is for my situation).  If properly installed, they'd both need at least a 35' mast to clear our 2.5 story roof.

The only feasible mast location would be our tall straight chimney but that would place the radiating elements 15' from my XYL's head, office and work station - you laughed, didn't you 😏.  The only other locations for a mast would be: Right on front lawn (screaming NO); The roof (no access for a 70+ year old = no maintenance = NO); and mounted on a rear deck with complications.

So, there you have my antenna dilemma in a nutshell.  I think the end-fed long wire and the 6BTV vertical are my 1st best practical and immediate solutions that will surely be plagued by the current S9+10db noise level.  However, as my older bro, WH4HIP, and I rag-chewed, we fathomed that the current poor wire antenna is likely noise prone and a vertical may be no worse for noise while affording a greater signal level increasing the S/N ratio.

A G5RV or a Double Bazooka are next next possible (albeit most difficult) routes for lower noise and higher gain to work my favorite bands for DX of 80-20 meters.

My latest mental shot in the dark was to push up a hex or cobweb to only 20' and place it a little further than that from my power lines so as to clear them in a failure.  That idea comes with the plus of great designs and cons of terrible low height and XYL misery.  Oy!

Stay tuned for my naive, clumsy, trampling along this path of discovery and frustration.